The Lean Leader braces for its latest recall

Once again, the father of Lean manufacturing is making headlines for the wrong reasons. The automaker has yet another recall on some of their best selling models, opening the door again for scrutiny and criticism regarding their Lean methods. Toyota’s Lean manufacturing techniques have become so popular over the past decade that you would be hard pressed to find a plant that doesn’t practice some form of Lean. However instances like these, always bring a bit of skepticism to the Lean way. 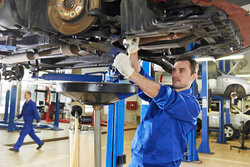 Recalls are not uncommon in the auto industry, but with the dust barely settling on Toyota’s biggest recall ever, the automaker can’t be thrilled about this latest announcement.

The latest recall affects 870,000 vehicles. Model year 2012 and 2013 Camrys, Venzas and Avalons, including hybrid versions of those models are part of the recall due to a problem with the air conditioning condenser unit housing according to the companies website.

In the involved vehicles, water from the air conditioning condenser unit housing could leak onto the airbag control module and cause a short circuit, resulting in illumination of the airbag warning light. In some instances, the air bag(s) could become disabled or could inadvertently deploy.

The Spider Did It

Eight legged creatures are apparently more of a nuisance than we thought. In some of the cases, Toyota has found that spiders are to blame for the failure. The spiders web creates a blockage in a drainage tube coming from the air conditioning condenser. This causes the water to drip onto the airbag control module, causing it to short circuit.

Is Lean to Blame?

The short answer is no, but rather than blame Lean as some have in the past, we should instead ask why. One of the simplest and effective lean techniques is the five whys. The method involves asking questions that start with why, until you get to the root of your problem. Toyota has used this technique for the better part of four decades now and understands the importance of asking why better than anyone.

There was no way to predict that spiders would be the cause of a failure (even though they out number us by a 1000 times and are literally everywhere), but the fact that it happened leaves us asking why.

Why was the unit not sealed?

Why did this not get tested prior to production?

Why does the circuit failure cause the airbag to deploy?

These are all questions that we can ask in hindsight now that a failure has occurred, but it goes to show the value that Lean has once a failure does occur. Lean is not to blame for the recall, but it should be credited for the solution and the process in which the solutions come from. To fix the current issue, Toyota dealers will apply a sealant and install a cover to the air conditioning condenser unit housing seam located above the airbag control module.

The foundation of Lean rests on your commitment to continuous improvement. I’ve yet to see a company not make a mistake, but what sets organizations a part, is their ability to learn and improve from their mistakes. The Lean processes that make up the Toyota Production System didn’t fail the automaker or cause a spider to crawl into the unit. However, as a result of this failed part, Toyota now has an opportunity to improve their product and the safety of their customers using Lean.

This recall is significantly smaller than the “accelerator crisis” from a few years back that took the lives of nearly forty individuals and caused Toyota to recall close to 9 million vehicles. This was the first time we saw Lean manufacturing methods scrutinized on a national level by mass media. The Wall Street Journal was just one of many that questioned the Toyota way.

–eliminating overlap by using common parts and designs across multiple product lines, and reducing the number of suppliers to procure parts in greater scale–can backfire when quality control issues arise.

Toyota called the issue a “quality glitch” and has been working towards improving their image ever since.

Key Ingredients for the Success of a Continuous Improvement Team

The Dangers of Combustible Dust within the Workplace